Volume of the truncated cone

To find the volume of a truncated cone (conical layer), it is enough to remember one simple formula that includes three unknown parameters (if we count together with π– four). But first, let’s remember what each word of the designated concept describes.

Volume of the truncated cone

Cone (from ancient Greek. -“pine cone”) is a surface that is formed in space by a set of rays (semi-straight; they form it) that act as a connector of all points of a certain flat curve (line; it is also its guide) with a given point in space (it appears to be its vertex).

In other words, it is the part of the cone that is enclosed between the base (i.e., the interior of a closed curve) and the plane that is parallel to the base and is located between its vertex and the base.

Note that a cone is a pyramid if its base is a polygon. 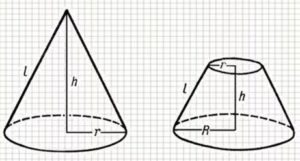 The formula for calculating the volume of a truncated cone is as follows:

r1 and r2– the radii of its lower and upper bases, respectively;

the number π is a mathematical constant equal to ≈3.14.