The volume of the tetrahedron

In order to find the volume of a tetrahedron, there are two simple formulas with different numbers of unknown quantities in them. But first, let’s remember what each word of the designated concept describes.

The volume of the tetrahedron

The length of the tetrahedron edge a
Calculate

A tetrahedron (from ancient Greek – “four bases”) is a polyhedron (polyhedron), whose faces are represented as four triangles.

A regular tetrahedron is one of the 5 “Platonic solids”, i.e. regular polyhedra. Its faces are equilateral (regular) triangles (in the amount of 4 pieces). It also has 6 edges and 4 vertices (in each of which 3 edges converge). 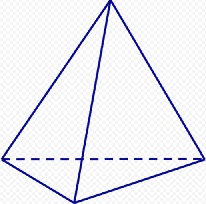 The formulas for calculating the volume of a regular tetrahedron are as follows (they are similar to the process of finding the “fullness” of an octahedron):

where a is the edge length of the considered polyhedron with four faces (tetrahedron).

The general formula for calculating the volume of an octahedron (through the base area and height) is as follows (it is similar to calculating the “fullness” of any pyramid and prism):

where S is the area of any triangle (cheat. face of a tetrahedron) acting as a base,

h– the height lowered on it.

Geometry:
Calculation of the area of the ring
Volume of the ball segment
The volume of the truncated pyramid
Find the angles of the triangle
Parallelogram height
Ball volume
Side of the square
Cotangence Calculator