Volume of the ball layer

To find the volume of the spherical layer, it is enough to remember one simple formula that includes three unknown parameters (if we count together with π– four). But first, let’s remember what each word of the designated concept describes.

Volume of the ball layer

A ball (i.e., a geometric body) is a collection of all points of space that are located in it from the center at a certain distance (read. in a certain distance; it is also considered its radius), which appears to be no more than the value set for it.

The layer here denotes a certain “limitation” in the space of the corresponding shape. 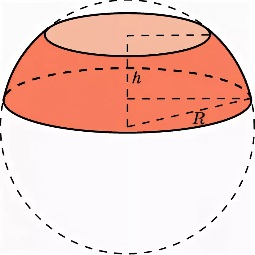 In other words, it is a part of the ball that is bounded by two parallel planes (they are also called secant planes), which, in fact, intersect it in space.

The formula for calculating the volume of the spherical layer is as follows:

where h – is the height,

r1 and r2– radii of the bases of the considered “limitation”;

the number π is a mathematical constant equal to 3.14.

Geometry:
Regular polygon area
Perimeter of a rectangle
Quadrangle area
Diamond height
Cylinder volume
Perimeter of a quadrilateral
Prism volume
The length of the sides of the rectangle